In this text we elaborate on the modern viewpoint of the quadratic reciprocity law via methods of alge- braic number theory and class field theory. We present original short and simple proofs of so called addi- tional quadratic reciprocity laws and of the multiplicativity of the Legendre symbol using decompositon groups of primes in quadratic and cyclotomic extensions of Q.

In this paper we can find new proofs of some theorems about quadratic residues via decomposition groups and Frobenius automorphisms. What does it mean, though? The quadratic residues are quite important objects in number theory with many applications, both theoretical(solving quadratic congruences) and practical ones (in coding theory, acoustics etc.). Consider an odd prime p – that is, a natural numberwhich is divisible only by 1 and itself (e.g. 3,5,11,…). We say that an integer a nondivisible by p is a quadratic residue modulo p if its remainder after dividing by p is the same as the remainder of some perfect square (ie. c2 where c is an integer). For example: −1 is a quadratic residuemodulo 5 since it has the same remainder after dividing by 5 as 4 = 22 ; 10 is a quadratic residue modulo 13 since it has the same remainder as 36 = 62 . However, the quadratic residues and their properties are not the main thing in the paper. Those are the proofs of those properties. The most important tool used throughout the proofs is the Frobenius automorphism, somewhat abstract and difficult concept from num- ber theory. Itsstudy has led to many breakthroughs, leading eventually – for example – to the proof of the Fermat’s Last Theorem. Therefore, it is uneasy to explain shortly what it is, but let’s try. We know that each integer can be decomposed uniquely as a product of primes and the primes cannot be decomposed any further (only as 1 · p which is uninteresting). However, this is no longer true as we pass to some bigger set of numbers. For example, consider the set Z[√2]= {a+b√2; a,b are integers} In this set, we obtain 7=(3+√2)(3-√2), so we have just non-trivially decomposed a prime. This leads to a question: considering a set O similar as Z[√2] above (more concretely: the ring of integers of some finite field extension of the field of rational numbers), can we say somethingabout how a prime p can be decomposed there? This question had been one of the leading ones in number theory for a long time. Frobeniusautomorphism of a prime p gives a partial answer. For any prime p and “sufficiently nice” set O, we always have a function Frobp,O : O → O. Once we now how this function looks like, we know how p decomposes in O. In particular, if Frobp,O is an identity, p decomposes as much as possible. But how does all of this relate to the quadratic residues? Surprisingly, it can be shown that in the case O = Z[√d], where d is not equal to 0,1 is an integer, we get for any prime p which is not equal to 2 the following: Frobp,O is an identity if and only if d is a quadratic residue modulo p. We can then prove many marvelous theorems with this information and you can find out how in the paper. 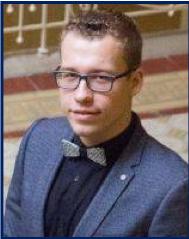 Tomáš Perutka is a student at the Faculty of Science in Masaryk University, Brno. He studies Pure Mathematics in the Department of Mathematics and Statistics. He is now mostly interested in algebraic number theory, category theory, and sheaf-theoretical methods in geometry and topology. He has beeninterested in number theory since high school; he has written there two manucripts about it which both competed in the competition SOČ. The first onewon the first place in the competition and it also won an award from the Learned Society of the Czech Republic. Moreover, Tomas Perutka obtained anaward “České hlavičky“ and it was chosen to represent the Czech Republic at the international competition CASTIC in Macao where it won the bronze medal. The time Tomáš does not spend with mathematics he usually spends doing ballrom dancing or practising kung-fu.